Of all the instruments made from a vegetable, the kora has to be one of my favourites. It’s made from a large calabash, a type of gourd that grows in West Africa, the original home of this instrument. The calabash is harvested, scooped out and the shell cut in half. A cow skin is used to create a resonator, like a drum skin. Then a long piece of hardwood is inserted to make the neck of the instrument for the twenty one strings of this harp-lute.

Until recent times, it wasn’t just anybody that could pick up the kora to play. That’s because the kora was one of the instruments played exclusively by a hereditary class of musician/storytellers known as griots, whose families originate from the time of the Mali empire, which spanned a large part of West Africa during the 13th -17th centuries. The role of the griot (known locally as jali or jeli), an important one in Mande culture, included learning the history, genealogy and traditions of their people and passing on that knowledge to future generations, through story and song.

There are a few well known griot family names: Diabaté (alternative spelling Jobarteh) Kouyaté and Cissoko for example. In the following clip, Toumani Diabaté talks about the griot’s tradition of kora-playing, and we see a kora being made.

The popularity of the kora in the West has led to people wanting to learn to play it, as is apparent from the clip above. I notice Toumani’s use of the French word ‘amateur’ is translated in the subtitles as ‘lover’ – the literal meaning. Sadly, the word ‘amateur’ in English has acquired the connotation of inferiority. As an enthusiast, I have been tempted to sign up for kora classes at the music summer school held at SOAS, University of London but so far have resisted taking up yet another instrument.

However, a good few years ago, I came across a small kora for sale. I bought it but I have never been able to tune it, as the hide that is used to tie the strings on has become brittle, so for the moment it’s hanging on the wall. I notice that nowadays kora players (particularly on the world stage), such as Toumani himself, have machine heads fitted to their kora which makes tuning easier. Perhaps I’ll try that with my mini kora …

I recently posted some clips of Toumani and Sidiki Diabaté and if you enjoyed their music you might like this playlist which covers a range of players, ensembles and styles including kora jazz, kora with cello and my current favourite: kora with viol, percussion and setar.

Here’s one more clip for you, from Africa’s first female griot kora player and singer, Sona Jobarteh. In this video we hear a live performance of her song entitled Gambia. What I love about this track is the sheer joy from everyone joining in, singing and dancing.

Here’s the official video release of the same track which features some brilliant dancing, a beautiful beach and a zebra.

And here are a few of my recommended recordings of kora music:

Wandering through London’s Covent Garden in the mid 90s, I noticed a display of unusual stringed instruments hanging up in an open shop doorway. Inside there were drums of many types and strange looking percussion instruments. It was my first encounter with Ray Man’s music shop and long before I had begun to study ‘world music’. When I went back some years later with the notion of buying an erhu, I couldn’t find it. I asked around and was relieved to discover that the shop hadn’t closed down … it had moved to Camden.

Now, located close to London’s Chalk Farm tube station, Ray Man’s shop is a rare and unusual find. What’s so special about it? It is one of few shops in the UK where you can buy a guzheng, a gong and a güiro. Don’t know what they are? Just ask. Ray Man and his family are a fount of knowledge of instruments from many parts of the world and specialists in traditional Chinese instruments, Chinese music and Cantonese music in particular. They are friendly and helpful, giving you advice on choosing an instrument, how to tune it and how to learn to play it. Ray Man Music Shop is more than just a shop – it’s a valuable resource on musical instruments from China and beyond.

There was nothing like it when Ray Man came to London from Hong Kong in 1955, arriving with little more than his musical talent. He began performing and teaching Chinese music and started a Cantonese Opera club. He soon became popular in Chinatown for his musical expertise and his amiable personality. He opened his first musical instrument shop in 1972 and has devoted his life to passing on his cultural heritage, running weekly classes and giving individual lessons.

Now in his eighties, Ray Man’s enthusiasm and interest in music is as lively as ever. He has to be persuaded to have a rest. His wife and sons now run the shop and although there’s no online shop, I did buy an Egyptian oud by telephone and it was carefully packaged and sent to Edinburgh, arriving in a box the size of a fridge!

At a future date, I shall bring you more of Ray Man’s story, including his memories of childhood in rural Hong Kong and his early days in London. In the meantime, if you want to take up a musical instrument but are not sure what, take a look in Ray Man’s music shop for some inspiration. Like many high street shops these days, Ray Man’s has to compete with the internet and its specialism is a niche market. But this is a unique treasure trove – so anyone who is involved in teaching children, or who wants to encourage their child’s (or indulge their own) musical curiosity should have a look at their selection of delightful instruments: thumb pianos, frog scrapers, gigantic seed pods, tiny bells, and thunder tubes to name a few. If you want to know about any Chinese instrument, from the smallest bamboo flute to the most gigantic gong or if you happen to be in Camden and want to buy a ukulele, Ray Man’s the man.

The first time I heard the erhu played live, I couldn’t quite believe the sound I was hearing from across the street. I had been walking up Edinburgh’s Royal Mile when the Festival was in full swing, buskers and actors filling the place with music and loud voices. Above it all soared a beautiful, haunting melody – it sounded like a flute or a high-voiced singer but as I got nearer, I saw a young Chinese woman in a long dress playing an erhu – a Chinese two-stringed bowed instrument.

This happened about ten years ago and I had been told by a Chinese musician friend that since I play the cello it would be simple to learn to play the erhu. But, earlier that summer, I had tried one and struggled to get more than an ugly scraping sound out of it. Here it was, a few feet away from me, being played with such skill. I was transfixed by the sight and sound. I went up to buy a CD and left a note asking if she would be willing to teach me. She agreed and that is how I came to have erhu lessons with Yan Xi, in a gallery on Edinburgh’s Victoria Street, where her husband’s wonderful paintings of Edinburgh were for sale. In this You Tube clip the performer (Liu Hong) demonstrates the expressive range of the erhu.

The erhu is made with a wooden soundbox like a small drum, usually hexagonal. The front is covered in python skin and the back with a piece of lattice work. The neck of the instrument is a long narrow piece of wood  – there is no fingerboard so the left hand fingers create different notes by placing them on the two strings. 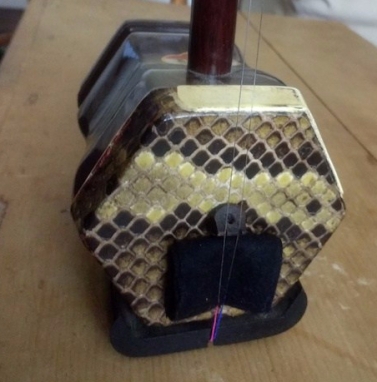 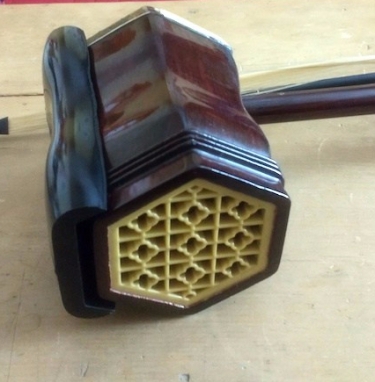 The strings are positioned close together and their vibrating length secured by a piece of thread wound around the neck. Originally the strings were made of silk but in the 1950s, the custom of using metal strings was introduced, to increase the instrument’s volume and modernise it. 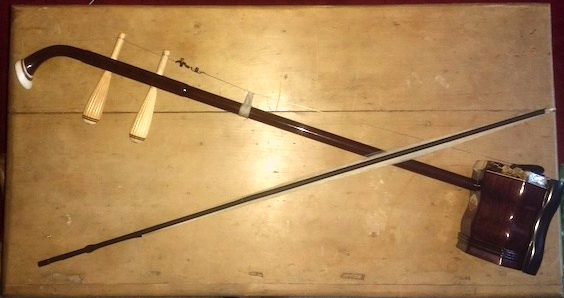 To play the erhu, the bow hair goes between the two strings and Yan Xi showed me how to play the outer string with one side of the hair and the inner string with the other side. You have to put rosin on both sides of the hair, of course and then use fingers and thumb to bring the bow hair towards each particular string. The erhu has an expressive quality similar to a human voice and that is what I have been aiming for, for years but have yet to master. I had only had half a dozen lessons when Yan Xi and her husband’s visas ran out and they returned to China.

Since then, I have been teaching myself and learning by copying some of the many erhu players I have met over the years including Mike Wang – musical director of Edinburgh Chinese Community Orchestra. I recently had a few lessons from another player from the orchestra in exchange for cello lessons. I’ve also had a few people tell me recently that it’s the most difficult Chinese instrument to play!

The erhu is one of a variety of similar ancient instruments found throughout China and many parts of the world, referred to generically as ‘spike fiddles’. The name ‘erhu’ derives from er meaning two (as in two stringed) and hu from hu-qin meaning barbarian instrument – a reference to related instruments originating from China’s north and western borders.*

Since the instrument’s revamp and the introduction of ‘conservatoire’ music education in the 50s, playing techniques have advanced and the erhu has become a highly regarded example of Chinese culture. Although nowadays, Western instruments are increasingly popular in China, the erhu maintains its presence in the Chinese orchestra and its prominent role in Chinese opera as well as its ability to astonish audiences when played as a solo instrument.

*For a detailed history and development of the instrument read the following available on JSTOR.

Read more articles like this by subscribing – scroll to the bottom of the page.