In four shocking weeks, scenes of devastation from the war in Ukraine have become the norm of our daily news. I check each morning, in the vain hope that it will somehow have stopped.

Amongst the terror and heartbreak, an occasional glimmer of beauty amongst the rubble comes to light. It seems that the power of music cannot be destroyed. The happiness on this child’s face shines out as she sings Let it go from ‘Frozen’. No wonder it has now been viewed millions of times around the world.

The news that this little girl, Amelia Anisovich, whose singing brought joy to those people sheltering with her in Kyiv, is not only safe in Poland but sang the Ukrainian national anthem in front of a stadium of thousands, was one heart-warming story.

Since the start of the war, I’ve watched Ukrainians singing their national anthem, on tv and social media: from the spontaneous response of a man being interviewed for a news report to the members of the Ukrainian parliament meeting in the first week of the invasion. It appears that the threat to their existence has strengthened feelings of Ukrainian identity and singing the anthem is symbolic of their resilient spirit of resistance.

The threat to their lives has led millions to flee but for those who have stayed, there is little comfort except perhaps from music. I can’t imagine that any musician expects to perform in a bomb shelter but here is violinist, Vera Lytovchenko doing just that.

In solidarity with Ukrainians, violinists from around the world joined another violinist, Illia Bondarenko who is playing here from a bunker in Kyiv.

Musical statements of resistance have sprung up even in ruined cities. Here, cellist Denys Karachevtsev plays Bach amongst the destroyed buildings of Kharkiv with the aim of fundraising for humanitarian aid.

Around the world, musicians from many genres have organised concerts to raise funds for Ukraine and to show their fellow feeling through music. Here’s Endpin Project Cello Choir playing the Ukrainian national anthem (with fundraising links when opened in You Tube).

We can express a depth of feeling through music that is sometimes difficult to put into words. This final clip offers a heartfelt message of hope for the Ukrainian people, in words and music, from Yo-Yo Ma and Emanuel Ax. 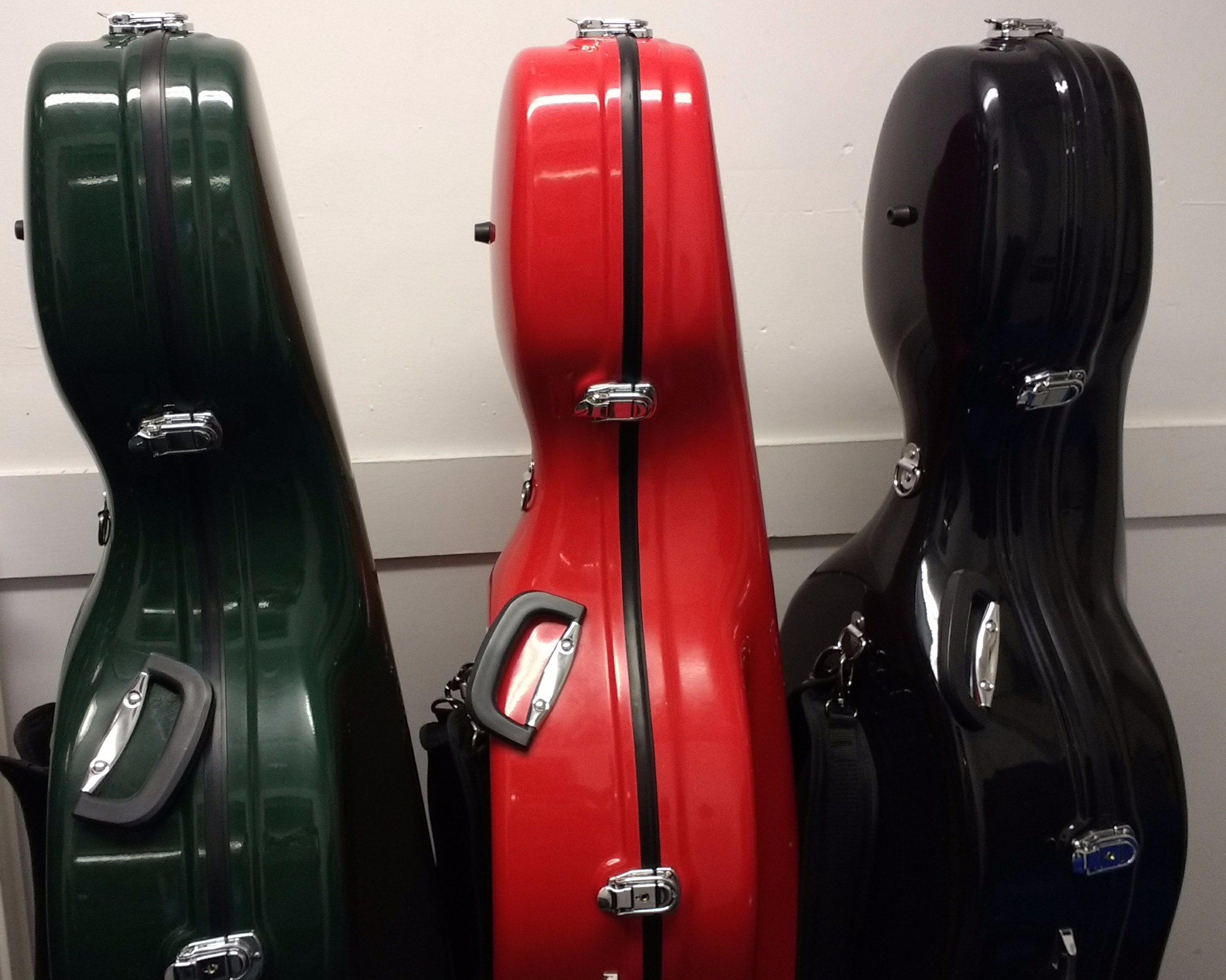 Whenever I tell anyone that I play the cello they tend to say something like:

“I love the cello, it’s such beautiful instrument.”

“Do you ever wish you played the flute?”

I never thought about whether I loved the cello or not when I began to play. Just before I started secondary school, my mum took out a cello from the back of her wardrobe. I’d never seen it before, even though I’d used that wardrobe many times to play ‘hide and seek’. She said I could learn to play it when I went to my new school. On my first day, the music teacher asked us to write down if we would like to play an instrument and if so what, I wrote down “Yes. Cello.”

But I didn’t really ‘get into’ the cello until I was a teenager and I joined a local youth orchestra. Even though rehearsals were on Saturday mornings – I loved it! I got up early and took two buses, changing at Manchester’s Piccadilly Gardens. The worst thing was, there was really only one seat where I could sit easily with a cello: the first one that has a wider space (designated nowadays as a priority seat). It was usually empty at that time on a Saturday morning but if someone was there, in that seat, I would have to go to the back and risk getting flung across the bus when it went round a corner, hanging on to that cello in its cloth case and terrified that it would get broken.

After rehearsals, seeing as I was in town, I liked to go window-shopping, to a record shop called Rare Records and to Gibbs, a second-hand book shop or go and browse in the music library at St Peter’s Square, except that I had that cello to carry around with me. It was a real nuisance.

Quite often, I’d get a lift from my mum especially to concerts. One time she had to hire a car as ours had broken down. It was bigger than ours and amazingly the cello fitted into the boot. But when we arrived at the pre-concert rehearsal Mum couldn’t get the boot open. The key didn’t seem to work. She even went to the police to ask if they could get it open for us! But they said these cars have a separate key to open the boot, to make them difficult to break into. We didn’t have another key and there wasn’t time to get one so I had to watch the concert from the audience and not play. Everyone asked me why I wasn’t playing. I was so embarrassed!

Not as embarrassed as I was when I had to go to a different room from usual, for my  cello lessons at school. I had to walk through a classroom full of boys. It was the most excruciating experience, not least because I was shy and skinny, in a frumpy uniform – box-pleated navy skirt and knee length grey socks. I could feel them all watching me and sniggering. It was a few months before lessons resumed in the usual room, to my relief. I couldn’t have done that much longer!

There were many things that could have put me off playing the cello but overriding them all, was the thrill I got from playing the cello in the youth orchestra. We played Liszt’s Hungarian Rhapsody, Brahms’ Academic Festival Overture, Schubert’s Unfinished Symphony and Beethoven’s Fifth. I didn’t always understand the notation but learnt to copy the other players. I was in awe of the first clarinettist and first oboe-player playing their impressive solos but was glad I belonged in the security of the cello section and loved being part of the full-orchestra sound with strings, woodwind, brass and percussion in full force.

I’d go home and tell Mum all about it, singing the cello part! And she’d say, “that doesn’t sound like the tune, what does the tune go like?” I had concentrated so hard on learning the cello part, I thought that was the tune!

A turning point came when on one of my trips to Rare Records I bought an LP of Elgar’s Cello Concerto in a famous recording by Jacqueline du Pré. I listened to it over and over and fell in love with it … its dramatic opening, soul searching phrases and soaring melodies. “So that’s what a cello’s meant to sound like!” Years later, studying for my degree, when my teacher suggested I learn the Elgar for my performance exam, I was so excited, I rushed off up town, straight away, to buy the music. And as I swept my bow across those opening chords, I was in my element. Nothing was ever going to put me off playing the cello! Do I wish I played the flute? Not in a million years!

Receive new posts from Liv’s Music World by adding your email address below.

For three weeks every summer, you can feel Edinburgh buzzing as the International Festival and the Fringe take over the city. Just yards from the noise and bustle of the street, I found a gem of serenity in St Cuthbert’s Church, at the West End: a recital of all six of Bach’s Suites for Unaccompanied Cello performed by Anne-Isabel Meyer, over three consecutive days.

Despite the grandeur of its ornate decoration, St Cuthbert’s feels like an intimate setting for unaccompanied cello. Its acoustic is resonant but clear and Anna-Isabel Meyer obviously loves playing here. This London-based cellist has a calm demeanour and she played with a warm tone. Each day, I felt even more privileged to hear how she allowed Bach’s music to speak with precision and clarity – no adornment or over interpretation here. Throughout the performance, the intricate melodic patterns of the preludes flowed freely, as did the dance-like quality of the allemandes, sarabandes, minuets and gigues. The famous bourrées of the third Suite just danced for joy.

Her performance of the Sarabande of Suite 5, for me, epitomised her sensitivity to Bach’s score. The music of this movement is apparently simple, no chords, no accompanying figures, trills or dotted rhythms. Meyer simply let the natural rise and fall of the phrases create their own meaning, allowing us to make what we would, of Bach’s perfectly crafted melody. I found it profoundly moving.

The sixth suite, written for a five stringed cello, truly tests the cellist. Playing this on a four-stringed cello, you have to create the higher sounds using the thumb in place of the extra string. She explained to the audience how at first this is painful and can lead to a blister on the thumb – I’ve had that blister too! Watching closely from the front row, I observed her meticulous technique, as she created the chords and inner harmonies and allowed the melodies to dance above them.

“Playing Bach’s cello suites is like going on a journey” Anne-Isabel Meyer tells us, “and next time it may be completely different.”

Here is a cellist with a deeply musical sensitivity. I look forward to joining her next year when she returns to St. Cuthbert’s to make that journey with the Bach Suites once again.