A gathering of musicians around the world is to unite on Sunday 11 November 2018, marking the centenary of the Armistice by playing together via social media. (See my previous post: Piece for Peace). Yesterday, the Edinburgh Chinese Music Ensemble met to prepare and record its contribution to the event: a version of ‘Armistice’ by Thoren Ferguson played on Chinese instruments.

Our ensemble is made up of a group of mostly Edinburgh-based musicians who enjoy playing Chinese music. It is a mix of people from Hong Kong, England and Scotland who are Edinburgh residents and people from China who have come to Edinburgh to study. The youngest player is at secondary school and the oldest is retired and the languages spoken in rehearsals can be a mayhem of Cantonese, English, Mandarin and of course Scots. Calm is restored when we play music together!

We have enjoyed preparing for this event and sharing our thoughts about WWI. For me, the fact that my grandmother’s fiancée was killed in France a few days before peace was declared is particularly poignant.

Here are some photos from our recording of Armistice. Our video is be uploaded to Facebook on 11.11.18 at 3pm (GMT). 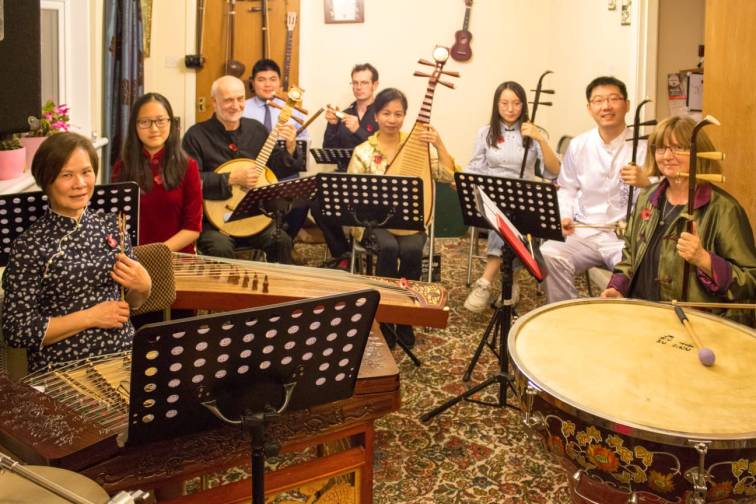 What can musicians do to stop the wars that continue to be fought throughout the world, one hundred years on from the end of WWI – the war that was meant to end all wars? Other than join marches and use our votes wisely, you might think there’s not much we can do. Yet by using the immense power that music has to bring people together, perhaps we can make small steps to bring about change.

One of the ways that music can lead to change, is by helping people connect with one another and break down cultural barriers, demonstrated for example by the work and ethos of the organisation Music in Detention. Their work recognises the value of music in helping immigration detainees find a voice at a time when they may be experiencing fear and isolation, many having come from war zones or having fled persecution.

In a similar way, music can help ease the distress of people who have been traumatised by war. Evidence of this is seen in the phenomenal work of musicians in countries affected by war, notably British composer, Nigel Osborne, whose work in post-conflict Bosnia and more recently with Syrian refugees, helps children yearning for peace and normal life, to find solace in music-making.

Through music we can also show an alternative response to ongoing conflict. An example is the West-Eastern Divan Orchestra, which gives young Palestinian and Israeli musicians an opportunity to play together. In this orchestra, founded by the pianist and conductor Daniel Barenboim, we see the spirit of musical collaboration rise above politics and prejudice.

The meeting of musicians from different ethnicities is nothing new. In the days of the Silk Road (the ancient trade route between East and West), people from different nations exchanged ideas, shared their music and brought their musical instruments to different lands. Nowadays, with the infinite resource of the internet, it’s easy for musicians throughout the world to meet and collaborate, learning about one another’s culture in the process. It is clear from the music and educational work of renowned cellist Yo-Yo Ma’s Silk Road Ensemble to the Edinburgh-based musicians’ recent concert Music Across Borders (amongst an output of countless professional and amateur musicians of diverse musical genres) that there is a growing desire to promote understanding and create friendship through music.

It is in this spirit of understanding and friendship that in less than a month, on 11 November 2018, a remarkable ‘global orchestra’, a new and growing community of musicians from around the world will play together, using social media, in a musical collaboration to mark 100 years from the end of WWI. This Concert for Peace has evolved from an idea proposed by Neil McLennan (Senior Lecturer at the University of Aberdeen) to do something more than the traditional remembrance service and two minutes silence: to create an event that demonstrates cooperation and collaboration across the world. In his words: “united voices need to be heard if we really want to end war and live in peaceful coexistence.” (RSA, 28.09.18).

This global orchestra will perform ‘Armistice’ composed for this special event by renowned Scottish fiddle player, Thoren Ferguson. The piece is scored for orchestra with a solo part to be played on the ‘Wilfred Owen Violin‘ which was made by Steve Burnett from the branch of a sycamore tree which stood in the grounds of the former Craiglockhart Military Hospital in Edinburgh. It was there that the poet Wilfred Owen spent a period of recuperation from shell shock during WW1 and it is now the site of Napier University Craiglockhart Campus where the main concert will take place. The idea is that this global group of musicians will join in via social media, playing the piece simultaneously at 3 pm (GMT) on Armistice day. In addition to honouring those who have sacrificed their lives in war, this concert demonstrates a desire to overcome conflict and to promote peace and reconciliation in the world through creative collaboration and cooperation.

Musicians around the world have been arranging ‘Armistice’ for everything from solo piano to saxophone ensemble and their performances will be shared on Facebook. For example, I am involved in arranging a version of ‘Armistice’ for traditional Chinese instruments which will be played by members of Edinburgh Chinese Music Ensemble to be recorded and posted on this website and on Facebook.

More details about the event and how to get involved can be found at:

Here is a film of the event.

The organisers of the event have put together a film which features many of the musicians from around the globe who took part in this International Concert for Cooperation, Peace and Reconciliation. We hope this global community of musicians will grow so that our message of hope for a more peaceful world can be shared far and wide.